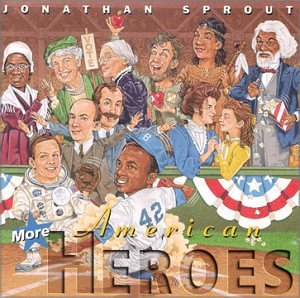 "In a perfect world, Jonathan Sprout's American Heroes series of CDs would be distributed in every classroom." -- "i"Kathy O'Connell, MetroKids, Philadelphia, September 2000

"When they flew, They had the future in their eyes..." The Wright brothers are given their due-along with Sojourner Truth, Neil Armstrong, Susan B. Anthony, Eleanor Roosevelt, Jackie Robinson, Frederick Douglass, Tecumseh and Helen Keller-in Jonathan Sprout's latest inspirational album about people who made history in many different ways.

"p"The unremarkable, electronically mixed sound of the soft-pop melodies doesn't diminish the impassioned, lyrics that sincerely celebrate the first African American to break professional baseball's color barrier, the first man to step on the moon, men and women who overcame adversity, fought for freedom, peace, and civil and women's rights. Sprout leaves listeners with the message that "even a solitary spark, can chase away the dark" and make "A Better World." A 2000 Parents' ChoiceÂ® Recommended winner.

"h3"From the Artist "p"In early 1994 I learned of a survey in which children throughout the United States were asked to name their heroes. The top-10 list was full of present day professional athletes and cartoon characters. This is my response -- a collection of songs about real heroes whose lives exemplified character traits of honesty, compassion, courage, perseverance, responsibility and charity. I hope the songs will inspire you to learn more about these remarkable people! Jonathan Sprout "h3"About the Artist "p"Joe Mennonna, Peter Bliss, Jennifer Marks,Al Renino, John Mennonna, Vinnie Boombatze"br""br"Jonathan Sprout has performed more than 3,000 children's concerts, more than 1,000 adult shows and coordinated more than 700 songwriting workshops over the past 25 years. He has appeared on numerous TV shows and radio stations across the United States. He is the recipient of 6 ASCAP special awards, 2 NAPPA Gold Awards, a Parent's Choice Award and the Film Adivsory Board's Award of Excellence. In addition to releasing 8 acclaimed albums, Mr. Sprout has contributed to several internationally released children's albums.

Bishop Paul thanks congregations across the diocese for their generous giving and serving through 2020:

“Thank you for making God’s love real and known in this difficult time, and for your financial giving which has been so generous against the backdrop of such difficult challenges this past year. This giving enables us to sustain and grow the life of the church across the diocese.”

To make a gift directly to the diocese please follow the link below – any gifts will be used to support the Parish Share that enables the mission of the church in every community. Find out how to make a donation here.

We are committed to the safeguarding, care and nurture of everyone within our parishes and communities across the diocese.

The Church of England across Nottinghamshire

The Southwell & Nottingham Diocesan Synod and Board of Finance. A charitable company limited by guarantee: Company No 34165 England, Charity No 249359
Copyright 2013 Diocese of Southwell and Nottingham